"Attachment to the soil is an inescapable aspect of the healthy psyche. Uprootedness is a kind of psychosis—sadly, rampant in our community-less society." Martin Lembec
Posted by gileskirk at 8:22 AM No comments:

The “parish life” dictum of Thomas Chalmers—“Gargantuanism and the care of souls cannot co-exist"—was borne out recently by no less an authority on gargantuanism than Bill Hybels and his Willow Creek franchise.

Last year, the church released its findings from a multiple year qualitative study of its ministry. Essentially, they wanted to know what programs and activities of the church were actually helping people mature spiritually and which were not. The results were published in a book, Reveal: Where Are You?, co-authored by Greg Hawkins, executive pastor of Willow Creek. Hybels called the findings “earth shaking,” “ground breaking,” and “mind blowing.”

According to Hawkins, “Participation is a big deal. We believe the more people participating in these sets of activities, with higher levels of frequency, it will produce disciples of Christ.” This has been Willow’s philosophy of ministry in a nutshell. The church creates programs and activities. People participate in these programs and activities. The outcome is supposed to be spiritual maturity. In a moment of stinging honesty Hawkins says, “I know it might sound crazy but that’s how we do it in churches. We measure levels of participation.”

Speaking at the church’s Leadership Summit, Hybels summarized the findings of the shocking study, “Some of the stuff that we have put millions of dollars into thinking it would really help our people grow and develop spiritually, when the data actually came back it wasn’t helping people that much. Other things that we didn’t put that much money into and didn’t put much staff against is stuff our people are crying out for.”

Having spent thirty years creating and promoting a multi-million dollar organization driven by programs and measuring participation, and convincing other church leaders to do the same, it is obvious why Hybels called this research “the wake up call” of his adult life. What’s not so obvious is why the rest of the church has failed to share in his gargantuanism epiphany.
Posted by gileskirk at 8:21 PM 2 comments:

Yearning for the Transcendent

Ed Stetzer, Director of LifeWay Research, was surprised by a recent survey which found that unchurched people between the ages of 25 and 34 were nearly twice as likely as those older than 70 to prefer ornate, Gothic church exteriors: "We expected they'd choose the more contemporary options, but they were clearly more drawn to the aesthetics of the Gothic building that the run-of-the-mill, modern church building."
Posted by gileskirk at 7:10 AM No comments:

There is an excellent review of three recent collections of letters by stalwarts of the faith at The Shepherd's Scrapbook. All published by Banner of Truth in the last two years or so, the works include The Letters of John Newton, The Letters of Thomas Chalmers, and The monumental , Letters of Samuel Rutherford.

I have found all three of these handsome volumes enormously helpful. Indeed, I have returned to them again and again for refreshment, Gospel hope, and pastoral vision. Despite the fact that at times the prose in these letters is far richer than that to which we have become accustomed, I highly recommend them.
Posted by gileskirk at 3:07 PM 1 comment:

In his final sermon, Chalmers exhorted his hearers in London, “The Church of Jesus Christ will either multiply or divide.” This is as true of a national church as it is of a local church. The Gospel will not remain still. Therefore, if a church does not go forth to the ends of the earth, aggressively pursuing the task of multiplication, the exponential growth of the Kingdom, rather than the arithmetical growth of the Kingdom, it will surely divide. And the splitting and re-splitting and re-re-splitting of our Reformed communions is sad testimony of this truth.
Posted by gileskirk at 9:57 PM No comments:

“There is not, of course, any difficulty in explaining the indifference of the modern secular mind to Chalmers, neither is it surprising that churchmen of liberal persuasion should lack enthusiasm for his memory. What is more problematical is the question why evangelical Christianity itself should have made so little of him these many years.” Iain Murray
Posted by gileskirk at 11:24 AM No comments:

“If the church of Jesus Christ does not become central to the life of growing cities then the cities will become mere geographies of no singular place.” Thomas Chalmers
Posted by gileskirk at 7:24 AM No comments:

The Renovation of the World

“Jesus Christ dies, the just for the unjust, to bring us to God. This is a truth, which, when all the world shall retrieve it, all the world will be renovated.” Thomas Chalmers
Posted by gileskirk at 3:27 PM No comments:

“It is not possible to maintain orthodoxy through induction. Instead, orthodoxy must naturally be deductive--rooted in the rightful elucidation of the Holy Scriptures. Herein is the first principle of ecclesiology.” Thomas Chalmers
Posted by gileskirk at 10:25 AM No comments:

“To know Chalmers is to love him, and to wish to be like him. Those to whom the cause of Christ is dear can but seek that a double portion of his spirit should be upon them.” Adam Philip, Foreword to Thomas Chalmers: Apostle of Union
Posted by gileskirk at 8:44 AM No comments:

“On the system of ‘Do this and live,’ no peace, and even no true obedience, can ever be attained. It is ‘Believe on the Lord Jesus Christ and thou shalt be saved.’ When this belief enters the heart, joy and confidence enter along with it. The righteousness we try to work out for ourselves eludes our impotent grasp, and never can a soul arrive at a true and permanent rest in the pursuit of this object.” Thomas Chalmers
Posted by gileskirk at 9:45 PM No comments:

“Regardless of how large, your vision is too small.” Thomas Chalmers
Posted by gileskirk at 9:42 PM No comments: 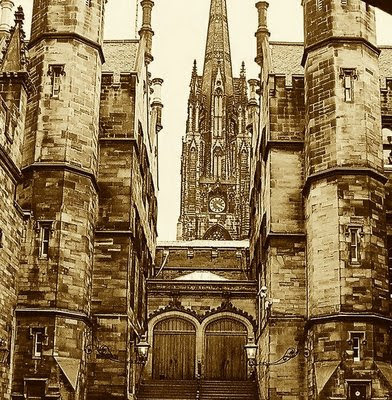 “It is only the gospel of Jesus Christ which has the power to deter the effects of the looming Modern disaster, and all of the ministrations of the state will only portend to the undoing of the family, the rescinding of initiative, and recoiling from human dignity. If we wish slaves, then let the government do its work, but if we wish men, then let us ply the truth.” Thomas Chalmers
Posted by gileskirk at 9:19 PM No comments:

“If the church of Jesus Christ does not become central to the life of growing cities then the cities will become mere geographies of no singular place.” Thomas Chalmers
Posted by gileskirk at 9:13 PM No comments:

By Dint of Steady Labor

“It is by dint of steady labor—it is by giving enough of application to the work, and having enough of the time for the doing of it—it is by regular painstaking and the constant assiduities—it is by these, and not by any process of legerdemain, that we secure the strength and staple of real excellence.” Thomas Chalmers
Posted by gileskirk at 9:11 PM No comments: 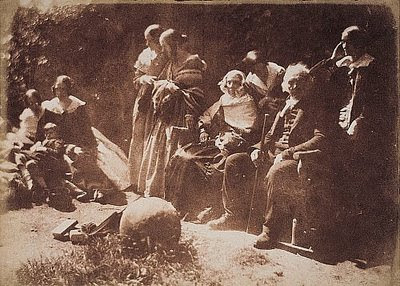 Posted by gileskirk at 9:16 PM No comments:

"Now, in our large towns, we have the ministerial service without the pastoral; and we all know what a loose and precarious connection between ministers and people this has given rise to. It forms a most imperfect spiritual husbandry—just as much so as if in natural husbandry the whole of the agriculture were confined to the mere casting of the seed upon the ground, without any preparation of the soil before, without any inquiry or care about the progress of the vegetation afterwards, although the rains of heaven, which easily might have been drained off, should destroy the rising crop, or the fowls of the air, which might have been easily scared away, should devour it. The scanty and uncertain produce from such mere scatterings as these, will represent the scanty and uncertain produce of all our city sermons. There has been little or no preparation of the soil for them beforehand, in a rising generation trained by religious schooling, or taught in the bosom of well ordered families; and no surveillance, whether by the pastor or his associates, afterwards, as in those good old days when it was not thought enough that ministers should preach, but that elders should “seek the fruit of it among the people,”—armed with authority enough to put down those moral nuisances which multiply now without check and without control on every side of us."

"There is a wide, and, under the present system of things, an impracticable gulf of separation between the clergyman and the families of his territorial charge; and even should his church, Sabbath after Sabbath be filled to an overflow by people not his own, he, on the one hand, can take no adequate weekly cognizance of them—nor, on the other, can he do aught to stem or make head against that practical heathenism, which is taking deeper root, and every year becoming more inveterate and hopeless within the limits of his own peculiar vineyard. Let the patronage be as righteous as it can, there is not a city-population what will not rapidly degenerate under the regimen of well-served pulpits and ill-served parishes. The word that is sounded forth may be carried far and wide, as by the four winds of heaven, and even descending here and there upon individual consciences, may cause that the town shall not be spread, but, if I may use the expression, be spotted with Christianity; just as in savage islands, where, with the distribution, such as it is, of the vegetable family under the random play and operation of nature’s elements still we might behold occasional tufts of richest luxuriance, or surpassing loveliness and verdure—yet the island after all is a howling desert; the town after all is a moral wilderness." Thomas Chalmers
Posted by gileskirk at 8:58 PM No comments:

Preaching Above the Roar

“Gospel preaching always requires great courage, both to execute and to tolerate, for it must ever needs be a running toward a lion’s roar.” Thomas Chalmers
Posted by gileskirk at 9:43 PM No comments: