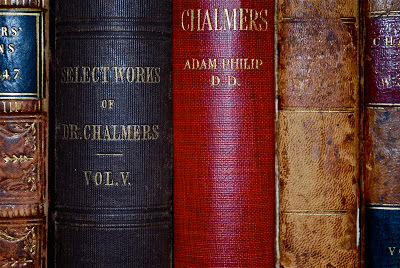 I am often asked by friends and students how to begin a serious study of the life and work of Thomas Chalmers.  This is at least partly because I can hardly ever give a lecture, preach a sermon, write an essay, or post a blog without mentioning him.  But even more, it is because reading Chalmers can prove to be an arduous and elusive pursuit.

Don’t be fooled by the fact that at the beginning of the nineteenth century, Chalmers was heralded as the greatest preacher in the English-speaking world: he is very difficult to read.  His vocabulary is vast and unfamiliar, his Scots syntax is peculiar to those of us accustomed to the less circuitous English spoken south of the Tweed, and his pre-Victorian, Regency era rhetorical formalism is quite alien to modern readers and speakers of the King’s Tongue.  Plowing through his dense style is more than a little difficult—but it is also very much worth the effort.

It is worth the effort, that is, if you can find his works to plow through.  And that is no easy matter either.  Virtually all of his books have long been out of print.  Reprints are not only few and far between, they tend to be scanned from antiquarian library copies rather than newly, clearly typeset.  You can find quite an array of titles in the Google Books and Guttenberg Project digital collections—but, they lack the context that good introductory essays, explanatory footnotes and historical references, and deep indexing might provide.

I have long thought that something like what James Bratt has undertaken to rehabilitate the life and work of Abraham Kuyper (especially his Centennial Reader and his magisterial biography), needs to be done for the life and work of Chalmers.  But until someone is able to take up that substantial mantle, we will have to content ourselves with a handful of scattered resources.

The first book that I always send readers to is the short profile by John Roxborough and Stuart Piggen entitled, The St. Andrew Seven  (Banner of Truth).  Though not entirely about Chalmers (most of the text is devoted to six of his students and the way he influenced the trajectory of their lives and ministries) it is nevertheless the best single, accessible work available in a modern edition.

The doctoral thesis of John Roxborogh is likewise very helpful.  Thomas Chalmers: Enthusiast For Mission (Rutherford House and Paternoster Press) is a concise examination of the parish vision and missional structure Chalmers helped to institutionalize in the Free Kirk.

In terms of biography, the most helpful work currently in print is a single chapter in Iain Murray’s A Scottish Christian Heritage (Banner of Truth).  As he always seems to be able to do, Murray captures the heart and soul of both the Gospel message and the human, historical means by which that message is proclaimed in this poor fallen world.

Another helpful doctoral dissertation recently published, but alas now out of print, is Stephen Brown’s Thomas Chalmers and the Godly Commonwealth (Oxford).  Serving as a critical biography, the work affords useful balance to the historical and theological reader. 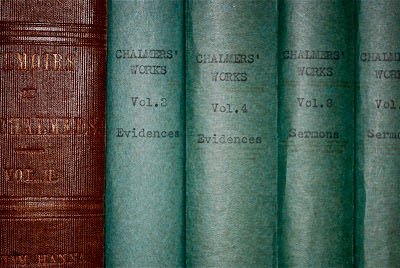 Of the nearly one hundred works actually written by Chalmers, only the two volumes of his Sabbath Scripture Readings (Solid Ground) and his Letters (Banner of Truth) remain in print.  The Readings are delightful Lectio Divina meditations on individual chapters of Scripture written for his personal devotions during the last few years of his life.  They provide us with a remarkable glimpse into both his heart and his ministry, his piety and his hermeneutic.  The Letters portray the great man at work, at home, on the stump, in the midst of controversy, in the classroom, and amongst his brethren in a way that only a collection of personal correspondence possibly could.

Of his sermons, only The Expulsive Power of a New Affection is widely available.  It is genius and certainly warrants the attentions of serious students of the Gospel.  But a host of his other works are as valuable.  A new, annotated edition of his most accessible works should be a high priority for an enterprising publisher—as would a new comprehensive biography and in-depth studies of his parish vision, missional strategies, and church planting endeavors.

Chalmers once asserted, “No matter how large, your vision is too small.”  My own vision for recovering the work of Chalmers from undue obscurity is large, but I am quite certain that in this too, he is right: it remains too small. 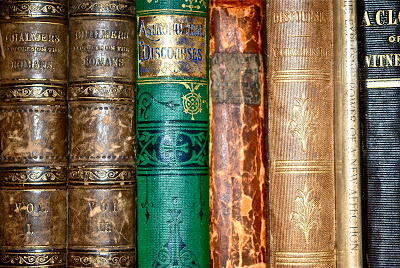 Postscript: I have been “working” on a number of volumes for the past several years.  At least a couple of them will see the light of day very soon: a new annotated edition of the Keystone Memory System devised by Chalmers should be released as an e-book later this fall; a very abbreviated, annotated collection of his sermons will be ready as a digital download shortly after that; a collection of epigrams and quotes is also nearing completion; a collection of my talks on Chalmers and his reforming vision could be ready as soon as this Spring; and both my big biography and my analysis of the parish system Chalmers recovered are on the drawing boards.  I even have titles for both: A Wider Diameter of Light for the former; Parish Life for the latter.
Posted by gileskirk at 5:00 AM

Thanks for your post. Do you happen to have a source for the Chalmers quote, ‎"No matter how large, your vision is too small"? Or would you know where I might start looking to find the source?

Tom: I found it quoted in Thomas McKillen's "Memoirs of a Parish Kirk," (Edinburgh, 1881). Apparently, it was a quip he made to his students at either the University of Edinburgh or at New College Edinburgh following the Disruption.

So excited to hear that there are two e-books of Chalmers one available by Christmas, the other maybe Epiphany?

Have enjoyed your lectures on Chalmers repeatedly over the years.

Any projections for when "Wider Diameter" and "Parish Life" might hit the streets?

Very thankful for your work on Chalmers.