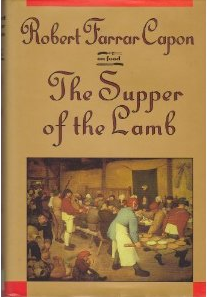 Robert Farrar Capon, a writer, thinker, pastor, and cook of extraordinary depth and insight, has gone home to be with the Lord.

He said and did and wrote much, for which we can all be thankful. Perhaps the following (one of my favorite passages from his revelatory book, The Supper of the Lamb) will suffice to explain why:

To raise a glass, however, is to raise a question. One honest look at any real thing—one minute’s contemplation of any process on earth—leads straight into the conundrum of the relationship of God to the world. The solution is hardly ob­vious. For something that could not be at all without God, creation seems to do rather well without Him. Only miracles are simple; nature is a mystery. Autumn by autumn, He makes wine upon a thousand hills, but He does it without tipping His hand. Glucose, fructose, and Saccharomyces el­lipsoideus apparently manage very nicely on their own. So much so, that the resolving of the conflict between the sacred and the secular (or, better said, the repairing of the damage done by divorcing them) has been billed as the major problem of modern theology. Permit me, therefore, glass in hand and cooking Sherry within easy reach, the world’s most interrupted discourse on the subject. In vino veritas.

Take the largest part of that truth first. God makes wine. For all its difficulties, there is no way around the doctrine of creation. But notice the tense: He makes; not made. He did not create once upon a time, only to find himself saddled now with the unavoidable and embarrassing result of that first rash decision. That is only to welsh on the idea of an unnecessary world, to make creation a self-perpetuating pool game which is contingent only at the start—which needs only the first push on the cue ball to keep it going forever. It will not do: The world is more unnecessary than that. It is unnecessary now; it cries in this moment for a cause to hold it in being. It was St. Thomas, I think, who pointed out long ago that if God wanted to get rid of the universe, He would not have to do anything; He would have to stop doing something. Wine is—the fruit of the vine stands in act, outside of nothing—because it is His very present pleasure to have it so. The creative act is contemporary, intimate, and immediate to each part, parcel and period of the world.

Do you see what that means? In a general way we con­cede that God made the world out of joy: He didn’t need it; He just thought it was a good thing. But if you confine His activity in creation to the beginning only, you lose most of the joy in the subsequent shuffle of history. Sure, it was good back then, you say, but since then, we’ve been eating leftovers. How much better a world it becomes when you see Him creating at all times and at every time; when you see that the preserving of the old in being is just as much creation as the bringing of the new out of nothing. Each thing, at every moment, becomes the delight of His hand, the apple of His eye. The bloom of yeast lies upon the grapeskins year after year because He likes it; C6H12O6=2C2H5OH+2CO2 is a de­pendable process because, every September, He says, That was nice; do it again.

Let us pause and drink to that.
Posted by gileskirk at 3:23 PM