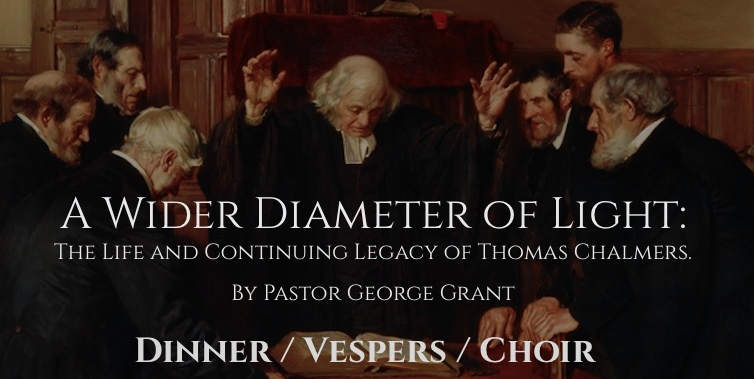 During the Christmas holidays in 1841, Thomas Chalmers, then perhaps the most prominent man in all of Scotland, paid a visit to the tiny Borders town of Skirling in Peebleshire. During his stay, he consented to stop by the local village school and give a lecture on Mathematics.

The great man was always inclined to leave a moral philosophy lesson for his students, even when he was teaching natural philosophy. And so it was that at the conclusion of his talk, he drew a large circle on the slate board and declaimed:

"The wider a man's knowledge becomes, the deeper should be his humility; for the more he knows the more he sees of what remains unknown. The wider the diameter of light, the larger the circumference of darkness. And so, with every footstep of growing knowledge there ought to be a growing humility--that is the best guarantee both for a sound philosophy and a sound faith."

The importance of this vital lesson was not soon lost on his awestruck students. Nor has it been lost on me. The phrase, "A Wider Diameter of Light," and all it seems to say about Chalmers, about his vision of the Christian life, and about his ongoing legacy has become emblematic to me of the vibrant Christian life. Not surprisingly then, it is the working title of the big biography of Chalmers that I am working on (well, working off and on). And, it is the title I have given to a series of stories I will be telling all through this upcoming Lententide season on Wednesday evenings at Parish Pres.

Won't you join us as we explore "A Wider Diameter of Light"? Dinner starts at 6 PM. A vespers of story and song begins at 6:30. Then, choir and prayer begin at 7 PM. RSVP with the church office.

Oh, and just a side note about the image: It was painted by John Henry Lorimer (1856-1936) was a renowned Scots portrait painter. Born in Edinburgh and trained at the Royal Scottish Academy. He was a student of George Paul Chalmers, grand-nephew of the great Thomas Chalmers. Perhaps his best known work (and my own personal favorite) is “The Ordination of Elders in a Scottish Kirk,” which hangs in the National Gallery of Scotland.  I think it really captures the very heart of "parish life" and the Chalmers ideal.
Posted by gileskirk at 8:59 AM